WORLD STROKE DAY “SAY NO TO STROKE — REACH OUT FOR HEALTH!” 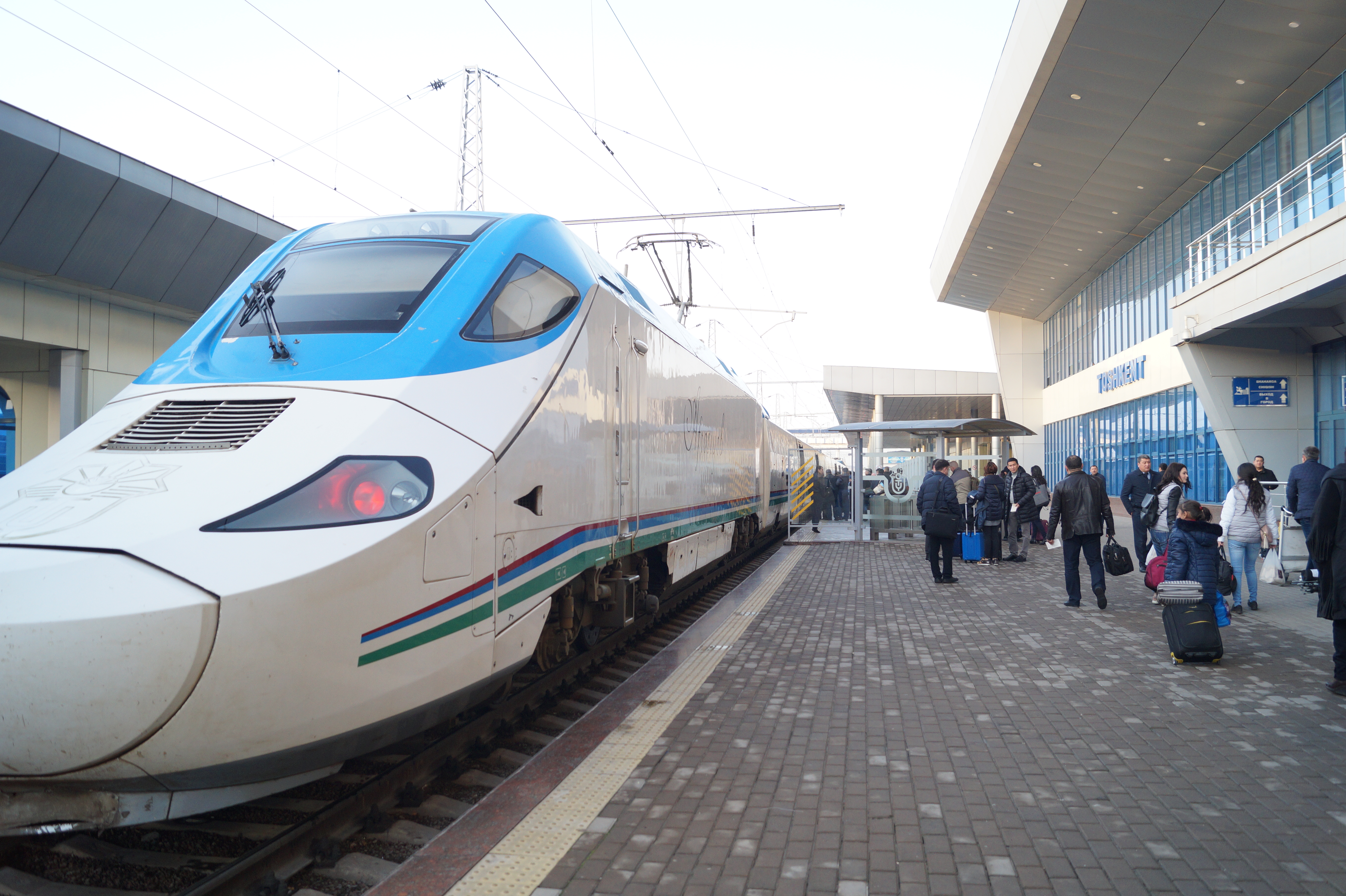 According to WHO, strokes and heart attacks are the main causes of death globally killing around 18 million people. This is one of the main causes of disability in the population. The statistics show that one in six people on the planet will experience a stroke once in their life, every six seconds someone dies of stroke regardless of age or gender. Globally, up to 15-20 million new cases of acute stroke are registered worldwide. Moreover, the disease is getting younger and 8% of stroke cases are detected in people younger than 40 years of age. The World Stroke Organization (World Stroke Organization www.world-stroke.org) was created upon the initiative of WHO in 2006  and October 29 was announced a World Stroke Day. This organization has over 3,500 individual members and more than 60 organizations from 85 countries including Uzbekistan. Every year, events and campaigns are held around the world to raise public awareness about prevention and treatment of this socially significant disease as well as on providing timely emergency care to save lives and reduce the risk of disability. 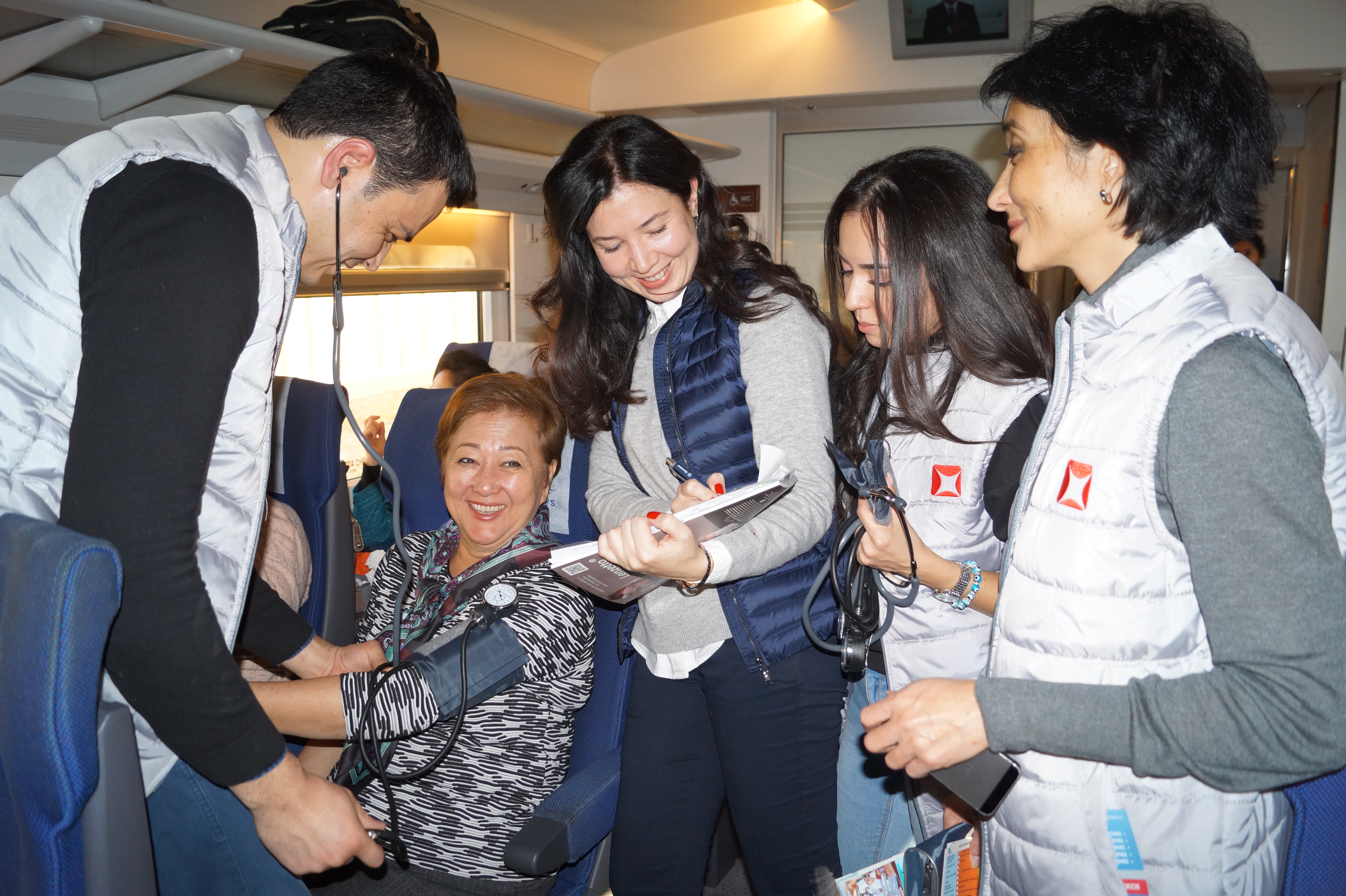 In line with a tradition, a social campaign “Not a Step Toward Stroke” set a framework for the Ministry of Health of the Republic of Uzbekistan, the Association of Neurologists of Uzbekistan as well as volunteer physicians, students and sportsmen to hold events aimed at prevention, information communication and sports with active support of “Ever Neuro Pharma” Pharmaceutical Company in Uzbekistan and information partnership with the scientific-practical and social advertising “Medical Express” Journal in the capital and the regions of our country.

On Afrosiab train from Tashkent to Karshi 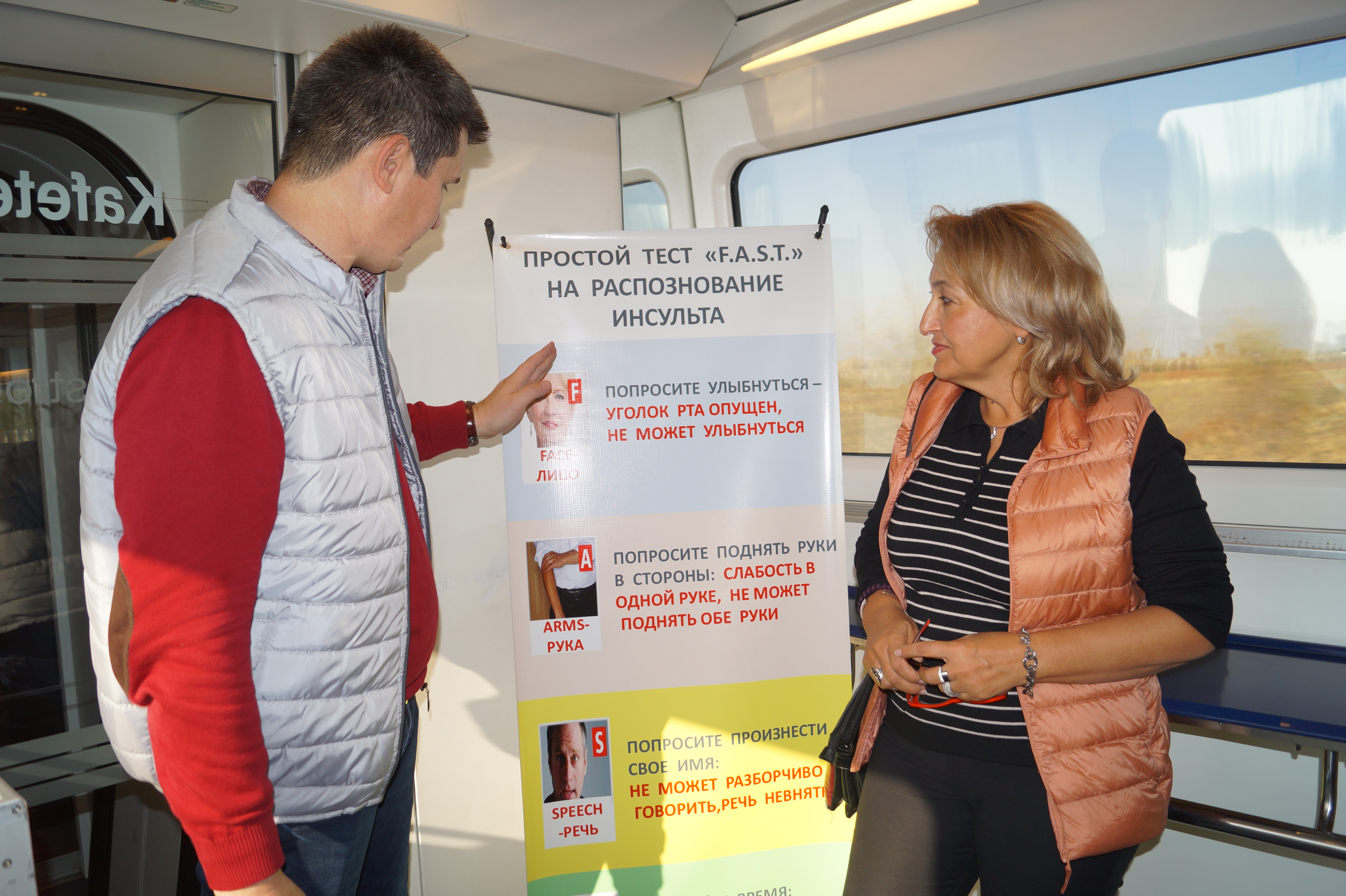 The campaign was launched on Afrosiab train from Tashkent to Karshi. Rapid diagnostics was conducted among patients in order to identify stroke risk factors, which involved blood pressure measurements, collection of a brief medical history, weight and height measurements. Memo questionnaires for scoring stroke risk factors and with information about how to recognize signs of stroke using a FAST test and about how to provide timely first aid in case of stroke were distributed among the passengers. A video spot about the FAST test – first signs of stroke – was broadcast on displays on the train. There is a quite simple, but reliable test for diagnosing stroke in ordinary conditions (helps to diagnose up to 80% stroke cases. In English literature, this test stands for “Face — Arm — Speech — Time”. The purpose of this test is as follows:

•  A patient is asked to smile or show teeth. In case of stroke, a noticeable face asymmetry forms (corner of a mouth droops).

•  A patient is asked to stretch the arms forward. In case of stroke, one arm is lower, they are not on the same level.

Presence of even one of these symptoms is the evidence of the development of a stroke, which requires ambulance to be called immediately – time is precious. The sooner care is provided, the greater are chances for rehabilitation. 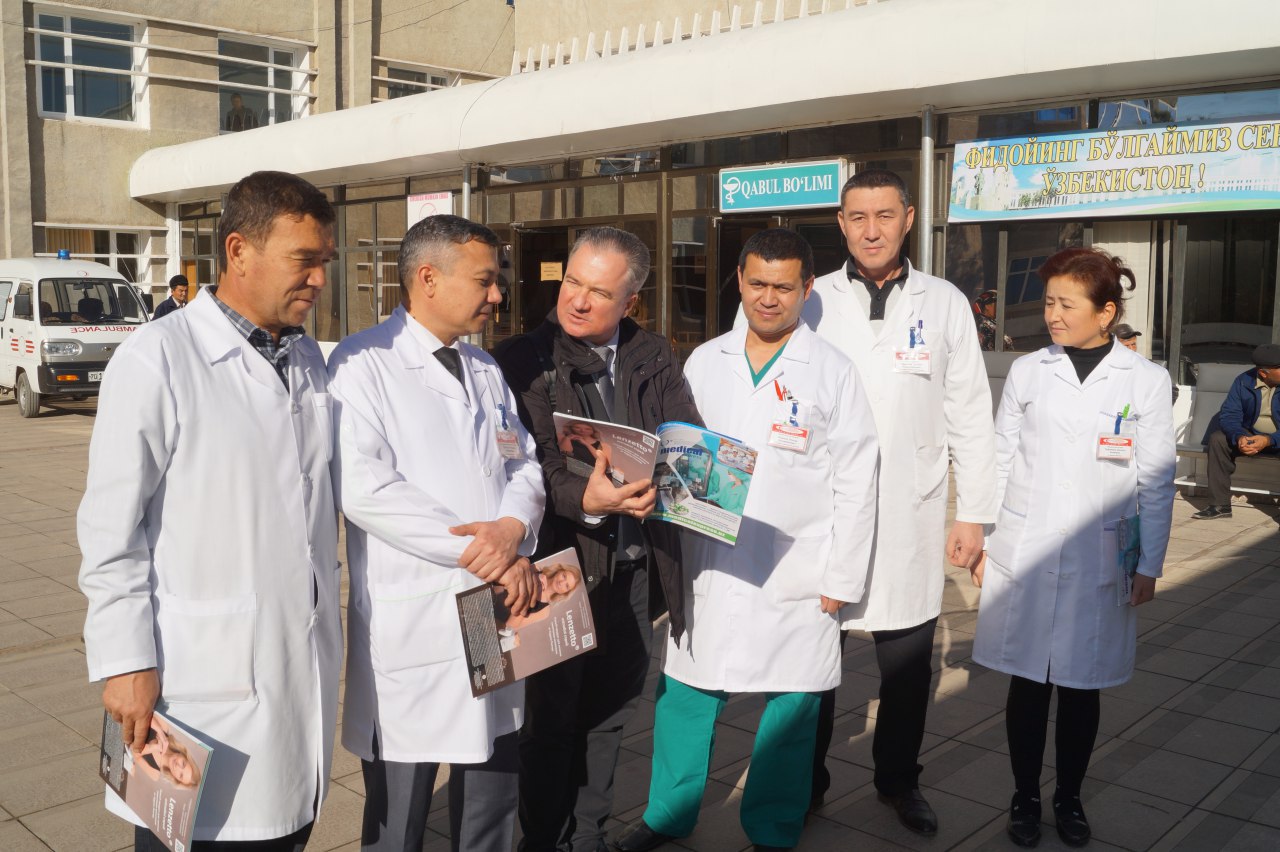 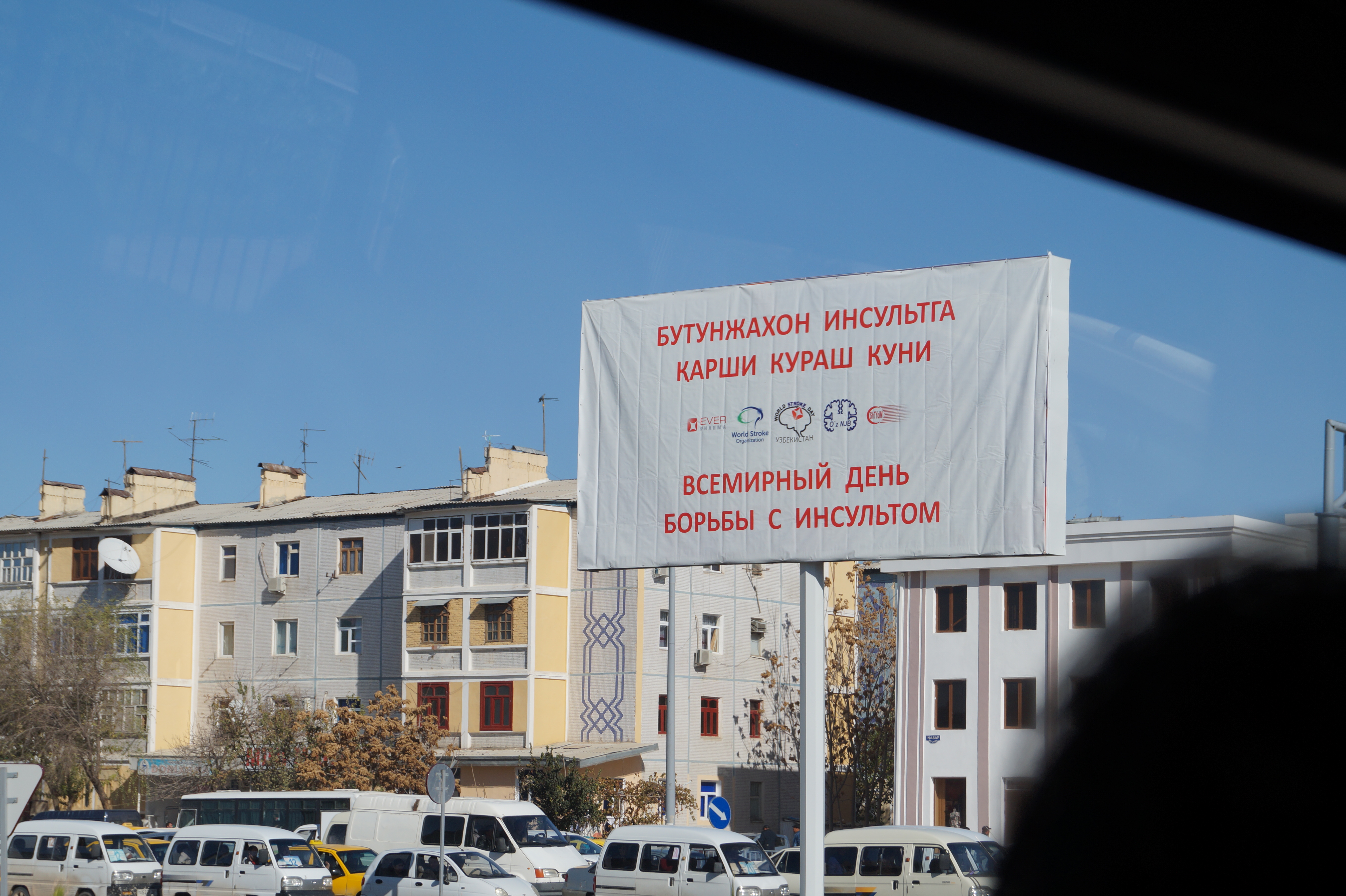 “NOT A STEP TOWARD STROKE” CAMPAIGN FOR THE POPULATION OF KARSHI

Upon completion of information and prevention activities on Afrosiab train, “Not a Step Toward Stroke” campaign continued for residents of Karshi at markets and supermakets in cooperation with volunteers including students in Karshi. A city sports complex “Manezh” launched the next sports and recreational phase of the campaign for stroke prevention and control. “Nasaf” sports school representatives competed in races with various distances and young people wrestled on tatami mats for prized places in taekwondo competitions. 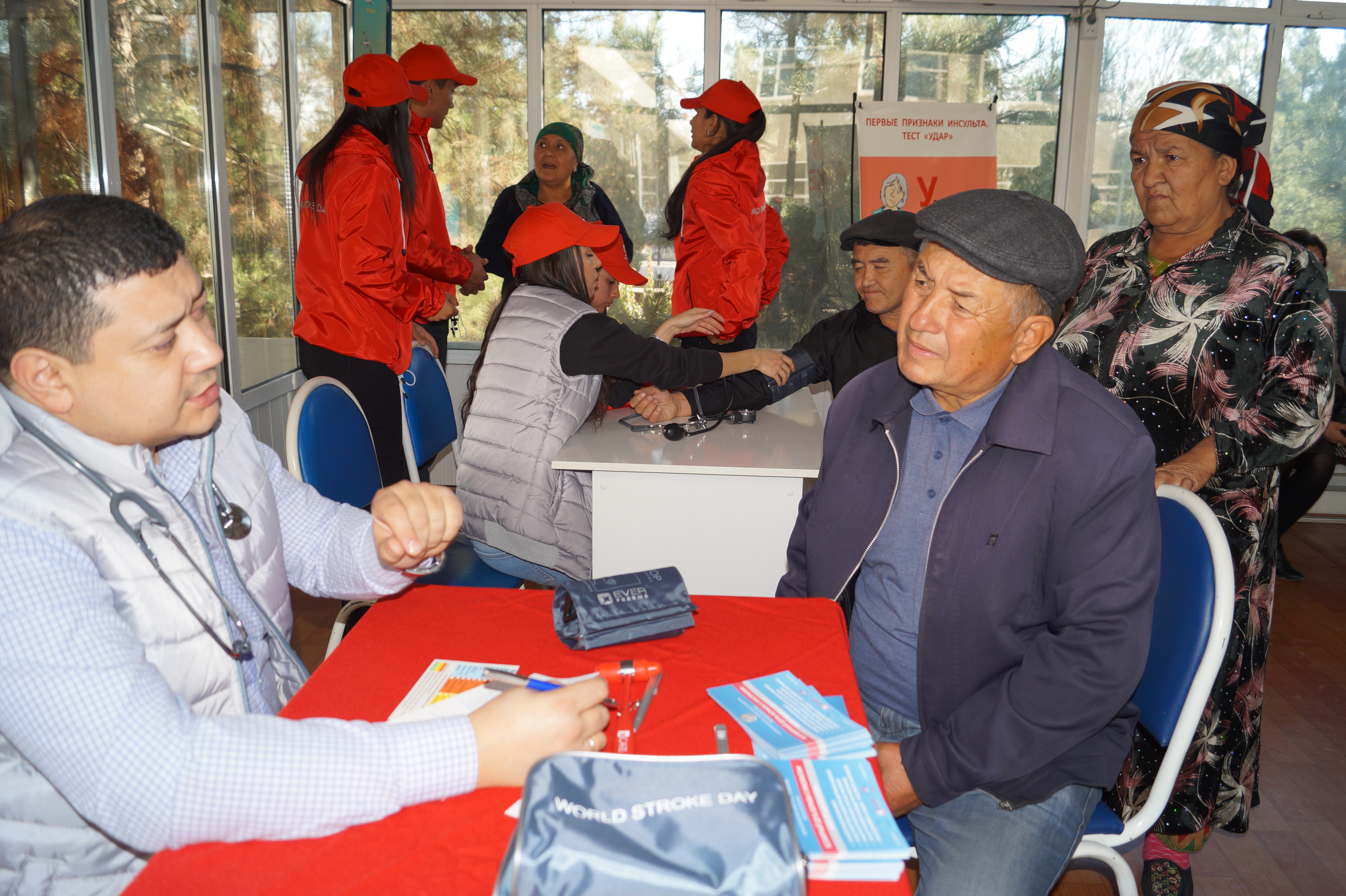 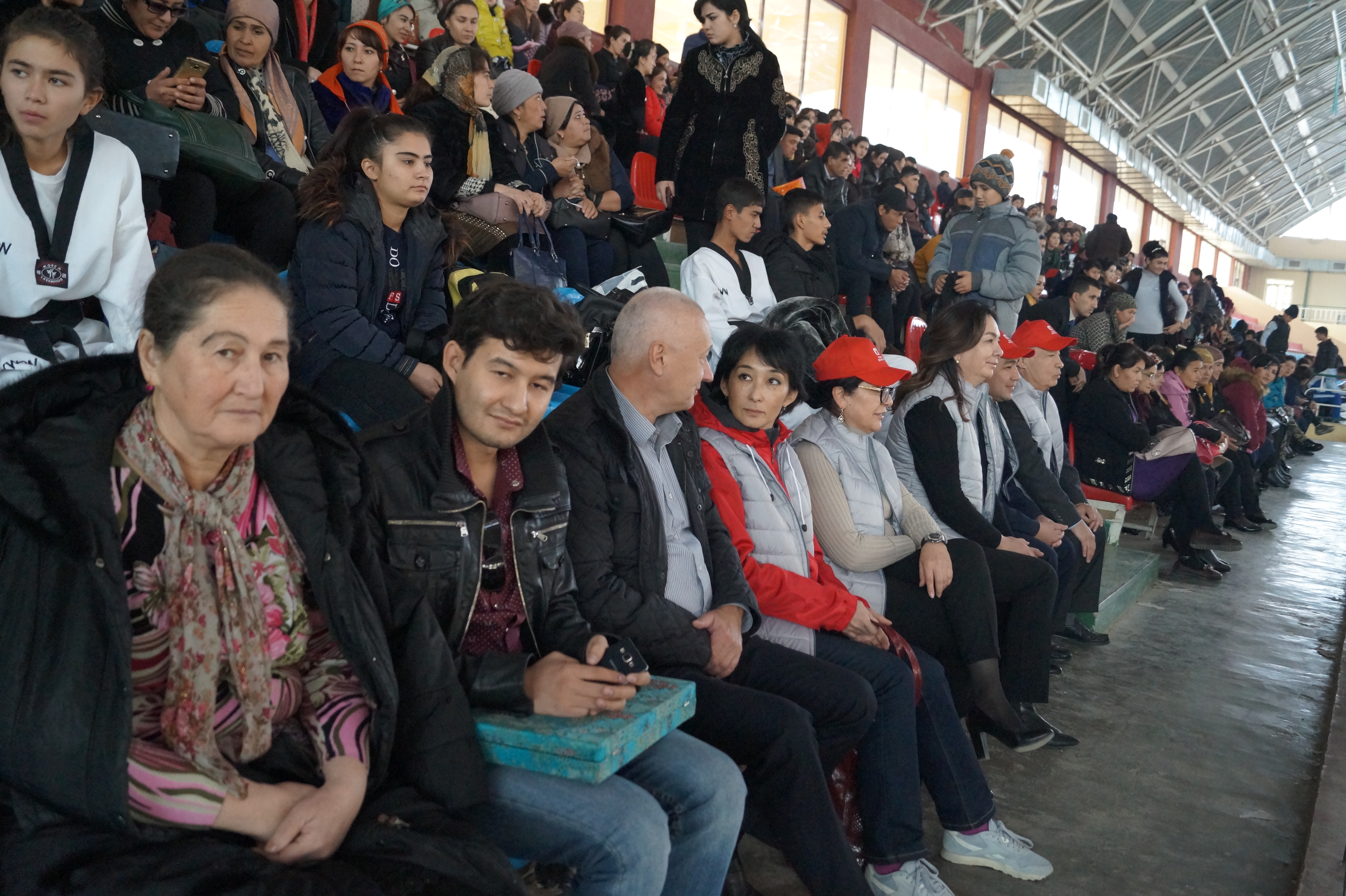 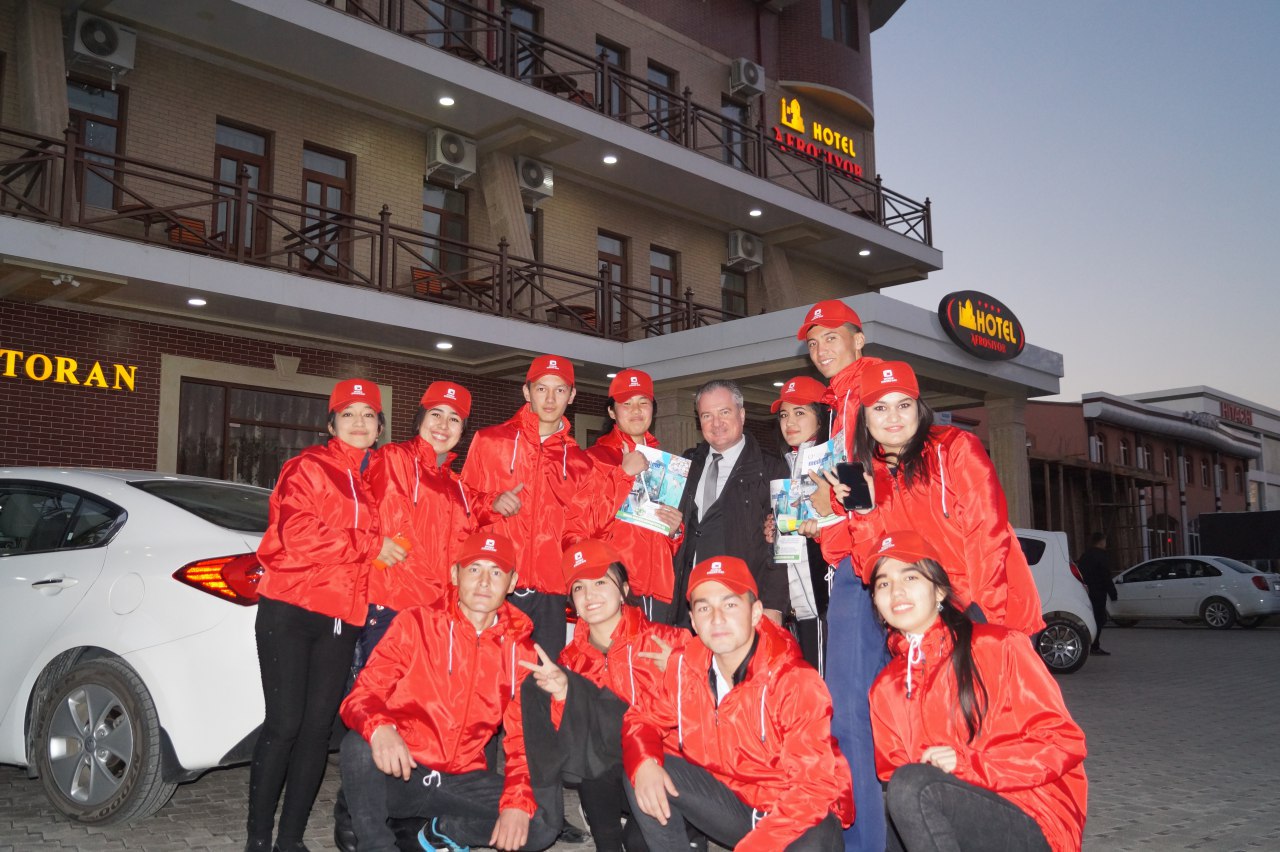 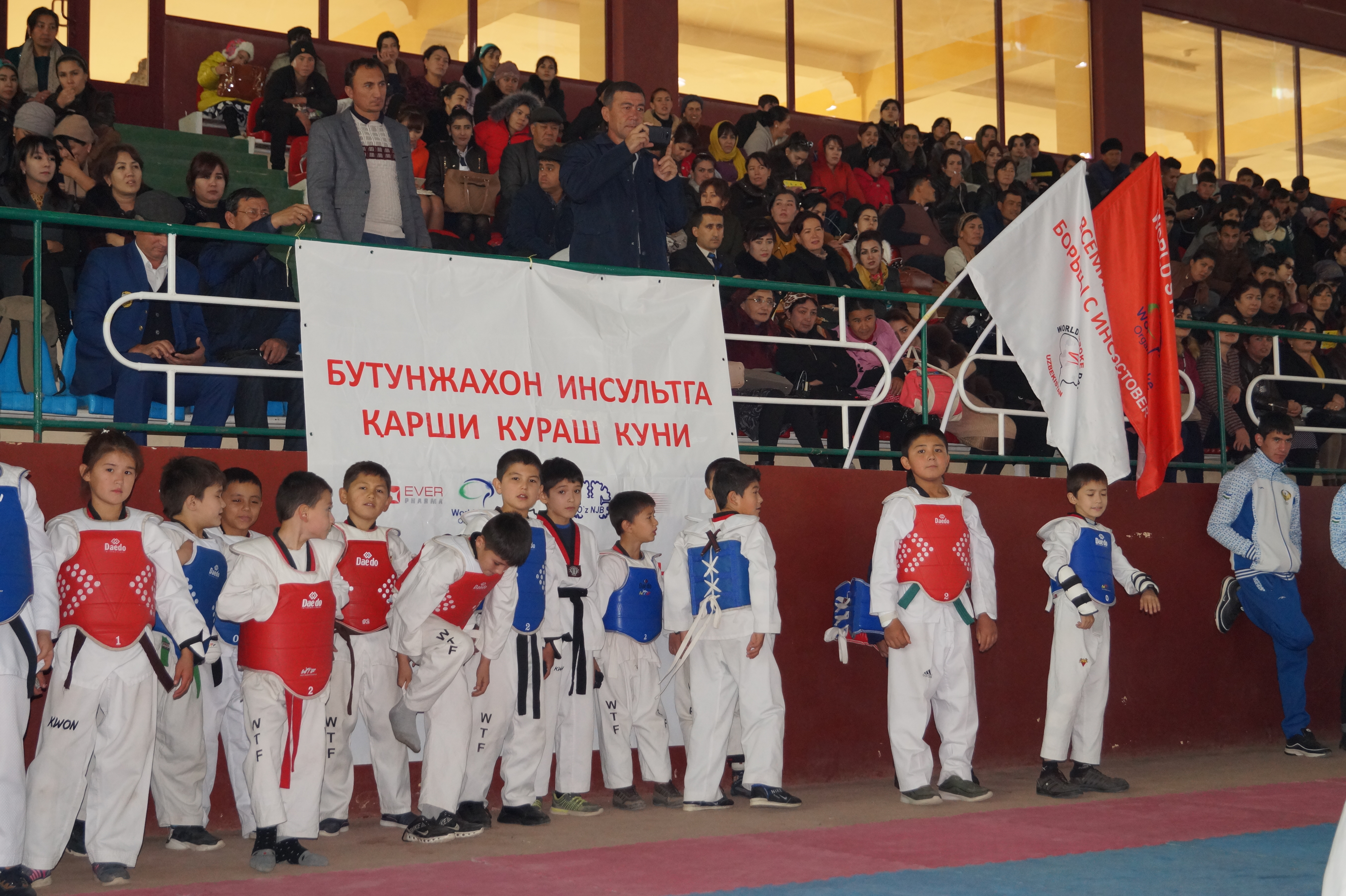 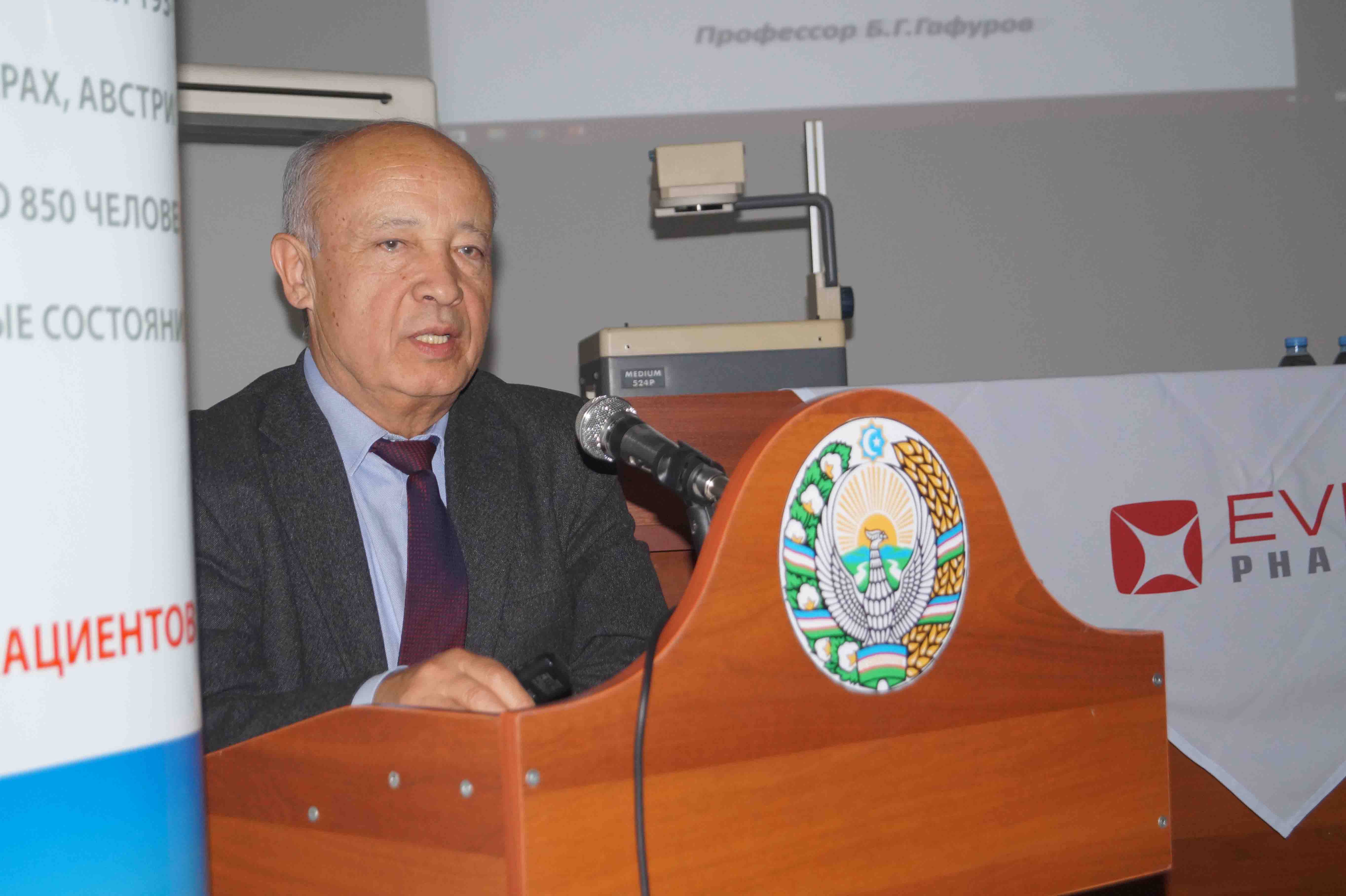 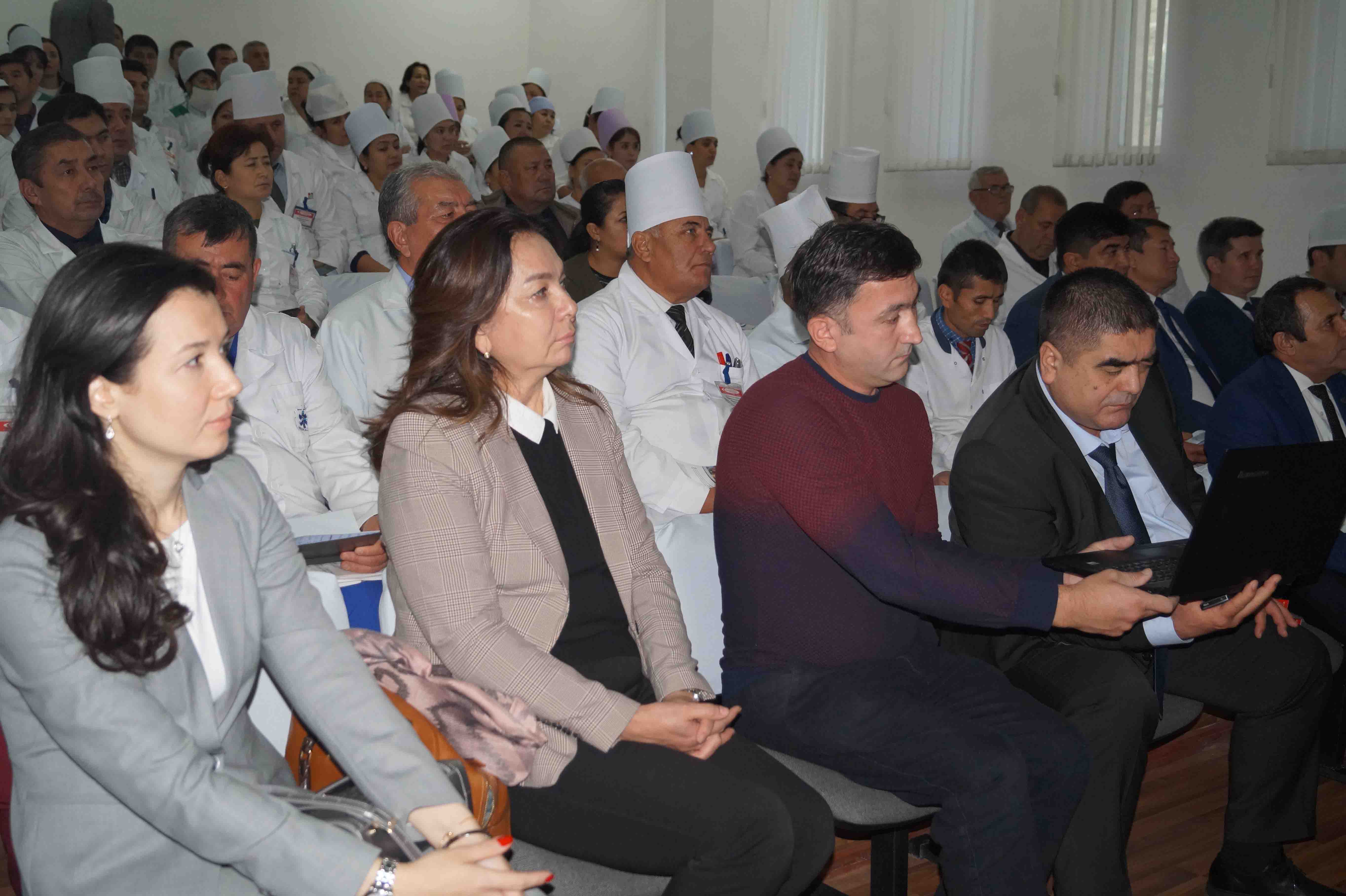 Chief Neurologist of the Ministry of Health of the Republic of Uzbekistan, Head of Neurology Sub-department at Tashkent Institute for Postgraduate Medical Education, Professor B. Gafurov, gave a presentation “Relevant Issues of Stroke Studies”.

The Head of “Ever Neuro Pharma” Representative Office, Ms. F. Fayzieva, addressed the organizers of the campaign and pointed out that by joining our efforts in combatting stroke, we will be able to confront this problem through prevention and alleviation of suffering among people.